Gaylord Hospital was under the spotlight Monday but that was all part of the act.
The hospital doubled as a movie set as some indy film makers brought their Hollywood dreams to Wallingford. The production is called “Gold Star” which is about an elderly father and his young daughter struggling after the father suffers a stroke. The film stars Oscar nominee Robert Vaughn, a Ridgefield resident, and veteran of hundreds of roles including “The Man From Uncle” and “The Magnificent Seven.” 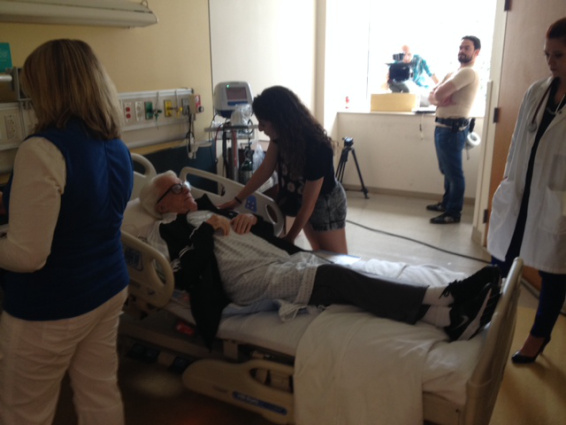 “I get up and go to work and it’s about a 20 minute drive,” Vaughan said in between takes of his hospital room scene. Vaughan noted helping upstart film makers is a way to pay things forward,” when I was young I was helped out by other people, when I was trying to get going everyone was nice to me,” he said.
The film’s co-star is Victoria Negri, from Orange, who also wrote it and is directing it. “Little production, big heart,” Negri said of her film crew. The crew, about 20 in total, has about 10 more days of shooting all over the state and hopes the movie will be done in about a year.

original posting (and video) at
http://foxct.com/2014/09/22/lights-camera-and-a-bit-more-action-at-gaylord-hospital/